What is GHRP-2 by Hilma Biocare? 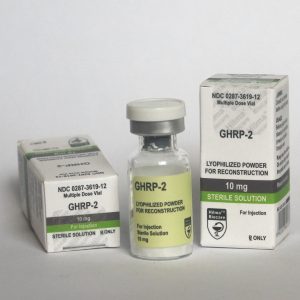 GHRP-2 that might be known in many other different ways such as Pralmorelin; Pralmorelin hydrochloride and pralmorelin dihydrochloride or as its full name Growth Hormone Releasing Peptide 2 (GHRP-2) is a growth hormone secretagogue that is being medically used as a diagnostic agent of growth hormone deficiency but is also a peptide which is very widely used by bodybuilders and athletes for other purposes.

This compound is coming as an orally active substance but is also having intravenous form of administration and there are many different pharmaceuticals manufacturing GHRP-2 and Hilma Biocare is one of them. Nonetheless, there’s still a huge difference between this peptide and the same peptide from other pharmaceutical companies and that’s the price. While a lot of companies offer a high quality and purity of GHRP-2, the price is much lower for the product obtained from Hilma and that’s a huge advantage.

Pralmorelin – GHRP-2 (Growth Hormone Release Peptide 2) is a synthetic peptide drug that is more specifically an analogue of met-enkephalin. It is an agonist of Ghrelin/ Growth Hormone secretagogue receptor and there are studies suggesting that plasma growth hormone levels are increasing a lot while using this product and is increasing the feeling of hunger a lot while making people want to eat more.

If you’re more familiar to GHRP-6 and wondering what’s the difference then you should know that these 2 are like brothers. They are both growth hormone secretagogue but GHRP-2 is also a synthetic agonist of Ghrelin.

The main difference between then 2 is: while there’s a huge hunger feeling while using GHRP-6, only a slight increase of hunger would happen with GHRP-2. This is one of the most favorite compounds to use when the individual is thinking about what should be stacked with GHRH.

GHRP-2 is considered to be a better peptide compared to its “brother” GHRP-6 and that’s because this synthetic peptide is offering all of the benefits associated with the activation of Ghrelin but doesn’t offer the hunger feeling side effect as intense as with GHRP-6.

If you still don’t know why is Ghrelin so important when it comes to Growth Hormone Releasing Peptide and to the entire bodybuilding thing then below you’re going to find more information and would understand why GHRP-2 manufactured by Hilma Biocare can be so helpful.

First off, you need to understand what is Ghrelin. This is a Growth Hormone secretion that is being “created” inside the stomach and is being very widely regulated by what a person is eating and his personal nutrition. There are studies which prove that this hormone is getting increased during those times when a person is fasting and anticipates meals.

With this being said, the peptide GHRP-6 mimics the effects of Ghrelin that are acting in a way making your stomach being as if in a state of fasting – this is the reason why there are users that are reporting getting extreme hunger feeling while using the peptide.

GHRP-2 is working in a very similar way but the modern medicine was able to “inhibit” the severity of hunger feeling with this peptide. Nonetheless, do not think that it won’t make you feel hungry.

The peptide is stimulating the Ghrelin release but not only because is also correcting the production of low levels of Growth Hormone too. In other words, when this synthetic peptide is used, the compound is working amazing for stimulating pituitary gland to release more Human Growth Hormone (HGH).

As a result of this, it was proven that this is offering gains of lean body in those people with lean body.

This compound is working by aiding more secretion of HGH in 2 different processes. In one of them, the peptide is boosting GH by amplification of the transduction pathway while is suppressing the hormone called somatostatin which is responsible for limiting the release of HGH.

Exactly as any other peptides that you can find, GHRP-2 is no different in the solution that it comes because any other peptide is coming as a lyophilized powder. This compound must be stored in a cool and in a dry place out of light and this compound must be then reconstituted (before using) with bacteriostatic water (in most cases) or with sodium chloride which then can be used as an intramuscular injection.

As soon as this powder got reconstituted, the product should be kept only in a refrigerator until you would use it as an injection.

It is said that the peptide GHRP-2 can be used in high doses in case this is required, nonetheless, this is still not very recommended taken in consideration that is not very clear how effective higher doses are. That’s why is recommended to use the compound within the normal dosing range which is usually anywhere in between 100 up to about 300 mcg per injection and must be used around 2-3 times per day due to its short half life.

Pretty much as with any other given GHRP, the peptide should not be used alone and is very recommended to combined GHRP (any) with a GHRH peptide and that’s done because this would maximize the effectiveness of using the peptides.

Also, by using this peptide, the user is going to end up with higher levels of prolactin as well as cortisol and this is going to be much possible to happen in higher doses, especially in doses over 200 mcg per injection.

People using this peptide are also reporting getting a feeling of lethargy as well as tiredness upon the first usage of GHRP-2. But some other side effects that were reported are included: tingling; decreased insulin sensitivity; water retention as well as numbness.

But remember that there are also positive side effects of using this synthetic peptide GHRP-2 and they include: increased lean body mass; decreased body fat; increases of bone density as well as increase in cellular repair; increases of IGF-1 production as well as better sleep.

In the time that all other peptides out there are having positive and negative side effects; GHRP-2 is considered to be one of the mildest GHRP and that’s why it would be a good idea to start with this type of GHRP if you’re a newbie.

GHRP-2, which is known as Pralmorelin and stands for Growth Hormone Releasing Peptide 2 (GHRP-2), is a synthetic peptide compound that is offered for a very low price by Hilma Biocare. While you might find many other pharmaceutical companies offering GHRP-2, you won’t find another of such a high quality and purity as the one from Hilma Biocare offered for such a low price.

GHRP-2 is one of the best things out there for increasing lean body mass gains off and on cycles and is also offering many anti aging properties too. This potent Growth Hormone Releasing Peptide would great help offering a lot of positive side effects while is offering least side effect compared to many other GHRP peptides.