What is Trenbolone Mix by Hilma Biocare? 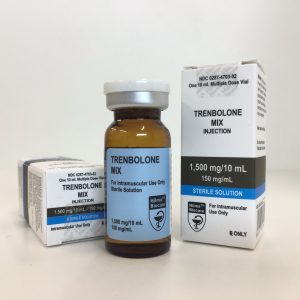 In the end, the individual is receiving only Trenbolone because this is the main hormone. The attached ester to each Trenbolone compound is only responding for a faster/ slower release of the hormone in the body after it got administered.

For example, the fasting acting ester (like Acetate) is offering very fast increase in serum trenbolone levels in the body in the same time when the slow ester (like Hexa, with Enanthate being in the middle), offers a slower but continued elevation of levels.

With all of this being said, Trenbolone Mix is offering stable as well as peak blood levels of Trenbolone and that’s one of the main reason why the compound is so widely used. Trenbolone itself is very powerful offering anabolic to androgenic rating of 500:500 making it be 5 times the potency of testosterone.

This compound has the ability to completely change the user’s physique and greatly improve strength levels. Trenbolone is known for offering significant increases in strength levels, in appetite, aggression, muscle growth (anabolism) and was proven to be helpful for reducing body fat too. In short, it makes you lean, big and powerful.

What is Trenbolone Mix Used For?

Nonetheless, each of these compounds are widely used in bodybuilding industry for various purposes. That’s because Trenbolone is extremely powerful and being a hormone that makes animals grow as big as possible, is quite obvious that it would work in a similar way for humans too.

Trenbolone is considered an extremely powerful steroid and an “ultimate” steroid which can make you grow further even when all other steroids have stopped from being helpful.

Trenbolone is used in both cutting and bulking cycles and that’s because this steroid is having huge anabolic and androgenic activity while it does not aromatize and therefore it doesn’t convert into estrogen. Taking in consideration that it can make you grow a lot of muscles while it makes you lean and shredded by making you lose fat, Trenbolone Mix is perfect for both training phases.

This steroid works the exact same way as any other Trenbolone product in particular, the difference is that with Trenbolone Mix you get less injection frequency while having stable peak blood levels.

Trenbolone Mix is an oil-based solution, which should be used intramuscularly by injection. Taking in consideration that the compound is offering 3 different release times, the compound can be used less frequently than for example Trenbolone Acetate alone.

People report getting amazing success by using Trenbolone Acetate every 3-5 days. A dosing schedule once every 7 days might be enough, but for getting better results because of stable blood levels use it every 5 days at least.

Remember that the entire dosage is consisting only of Trenbolone and each ml used would offer 150 mg of Trenbolone. With this being said, a dosage higher than 4 ml per week is going to be dangerous even for professionals. That’s because 4 ml would be 600 mg and that’s a dosage that not everyone can tolerate, but dosages higher than 700 mg per week are dangerous.

Trenbolone is most often stacked with Testosterone. We would recommend Trenbolone Mix with Sustanon. Cycle length should be anywhere in the range of 8 up to 12 weeks maximum.

Trenbolone, being such a powerful steroid, is notorious for offering nasty side effects. However, there are people reporting getting no side effects at all. it very much depends on a number of factors and the most important one is the dosage.

By not exceeding cycle length, having a healthy lifestyle with diet and cardio, all along with helpful supplements that’s all going to help.

Dark colored urine, aggression, testosterone suppression, acne, oily skin, hair loss, insomnia, sweating, shortness of breath, reduced cardio resistance are only a few of the side effects you can get from Trenbolone Mix. There might be many other side effects that were not mentioned here.

However, by never abusing a Trenbolone compound, using it with big care, supplements etc. you would be able to tolerate the compound pretty well.

Where to Get Trenbolone Mix by Hilma Biocare?

Trenbolone Mix by Hilma Biocare is a very high quality mixture of all 3 Trenbolone compounds such as Trenbolone Acetate; Trenbolone Enanthate and Trenbolone Hexahydrobenzylcarbonate which might be known as Parabolan.

This mixture is offered for a very low price and customers can be sure that the steroid is of the highest quality and highest purity.