What is Clomiphene Citrate by Hilma Biocare 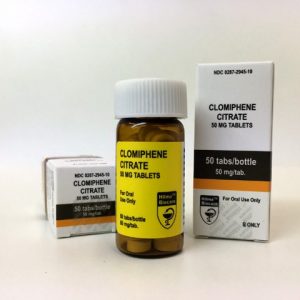 This is a very famous medication that has a long history as the compound has firstly been approved for medical uses many years ago. Nowadays, Clomiphene is in the WHO’s list of essential medicines. Bodybuilders and other steroid users require such types of medicines mainly for their PCT plans for restoring natural hormonal balance.

But in fact, Clomiphene known as Clomid, is a drug that is used to treat infertility in women who are not ovulating. Clomiphene is working by offering a release of the GnRH by the hypothalamus, and subsequently gonadotropin from the anterior pituitary and that’s why is helpful for bodybuilders.

Clomid – Clomiphene Citrate is classified as a Selective Estrogen Receptor Modulator (SERM) and this class of medicines is belonging to an even wider type of drugs that are known as anti estrogens. Anti Estrogens are known to control the estrogen levels and except for SERMs you can also find Aromatase Inhibitors (AIs).

Both AIs and SERMs might be anti estrogens, but there’s a big difference in how SERMs and AIs are working, in their mechanism of action and generally how they are controlling the estrogen levels.

When Clomiphene Citrate is used in medical settings, the medication is mainly given to women for dealing with infertility issues and that’s because the compound is known to induce ovulation. However, Clomiphene Citrate made by Hilma Biocare was specifically made for men using steroids who require a PCT plan in most cases. However, women might use the compound for fertility too if they would require it.

So, Clomid – Clomiphene Citrate is mainly being used during PCT cycles and usually during the time when the steroid users bodies has stopped from producing testosterone on their own due to prolonged exposure to steroid use. After the steroid cycle, they would require a Post Cycle Therapy in order to restore their natural testosterone balance and in such situations, this compound is used with amazing success.

Yes, Clomid – Clomiphene does have some abilities to block the estrogen in some certain tissues, but the main use of Clomid (steroid users and bodybuilders) is to stimulate hypophysis and therefore to stimulate the testosterone production in the testes. Studies done on Clomid for such purposes proven this medication to be extremely helpful.

Clomid is working as an estrogen agonist in certain tissues and estrogen antagonist in others. For this reason, it blocks the estrogen production in some body parts, but is also offering more estrogen in others (for example in ovaries) inducing ovulation.

In addition, Clomiphene Citrate stimualtes the hypophysis for releasing more gonadotropins and these are some protein hormones that are stimulating a faster and higher release of FSH and LH. When there’s a spike of LH levels, your testosterone levels start to go up too.

Clomid might have many other uses. Some people are using it for estrogenic protection during the administration with aromatizable steroids (mainly for gynecomastia protection) or it may be used for other purposes in medical settings. But in most cases, Clomid is either a fertility drug or a PCT medication.

How to Take Clomid? | How to Use Clomid – Clomiphene Citrate

Clomid containing Clomiphene Citrate shouldn’t be taken in way too high doses for being effective when talking about men using it for PCT protocols. Remember that higher doses might result in higher and worse side effects. Clomiphene Citrate is coming in form of tablets that should be taken by mouth.

The medication offers a half life of about 5-7 days (you can use as a reference point – 6 days), however, a daily administration is still recommended as it requires a while until it builds up in the system.

Most often, people prefer dosages of anywhere between 50 and up to 100 mg per day of Clomiphene Citrate as this dosage is enough for most men. The compound is very effective at such doses.

Nonetheless, there are reports suggesting dosages as high as 200 mg or even 300 mg a day, but such high doses are not recommended because they are greatly increasing the risks of getting side effects.

In the end, is not recommended to use more than required and is recommended to start slow. Usually, dosage of Clomid – Clomiphene depends on how harsh the steroid cycle was.

Most people do not get side effects if they are using Clomiphene Citrate in normal dosages. Most of the side effects are associated with doses that are higher than 200 mg a day or more than 4 tablets daily.

That’s why is recommended to start slowly and never abuse it. Most bodybuilders tolerate the compound extremely well and they rarely get any side effects at all. In fact, stopping a steroid without a PCT is worse in terms of side effects.

Some of the worst side effects of Clomiphene Citrate includes depression, high blood levels, liver inflammation and some others. By reducing the dosage you reduce the side effects.

Nonetheless, there are more common side effects of Clomid – Clomiphene Citrate which are headaches, sensitivity to light as well as some general visual issues, hot flushes as well as abdominal discomfort. Most often, women report getting side effects as they need higher doses for longer periods of times than steroid users for PCT protocols.

Clomiphene Citrate by Hilma Biocare is a very high quality SERM that can be bought from this site absolutely hassle free and by doing so, customers are guaranteed to get a very high quality product that might be better known as Clomid. This medication is super helpful for steroid users as a post cycle medication for increasing natural testosterone production.

Clomiphene Citrate by Hilma Biocare is going to offer you a very high quality product known as Clomid but offers the compound for a much better price.