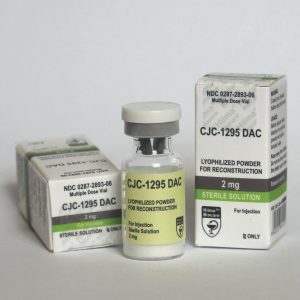 CJC 1295 DAC is the brand name of the peptide manufactured by Hilma Biocare which is a very famous pharmaceutical company known to offer very high quality compounds for lowest possible prices.

CJC 1295 DAC that is also known as DAC: GRF or in short is drug affinity complex : growth hormone releasing factor which is a synthetic analogue of growth hormone releasing hormone (GHRH) and a growth hormone secretagogue (GHS) that has been firstly developed years ago by ConjuChem Biotechnologies but nowadays this peptide can be found manufactured by many different companies. Hilma Biocare is one of them but is the company offering this peptide at the lowest price and maintaining the highest quality.

This is a modified form of GHRH (1-29) and more specifically it has improved pharmacokinetics and that’s especially when talking about the half life. More specifically, CJC 1295 is a 30 amino acid peptide hormone and this is a peptide that would release a series of pulses over a long period of time and this is usually going to require fewer injection frequency.

When this peptide was created – its main function was to boost protein synthesis and although this compound is extremely helpful for this purpose, it also increases growth hormone of the muscle tissues as well as many other benefits that would be explained later.

This is a compound that is very widely used in the world of bodybuilding, but is also very widely used by many other people simply who want to get a good looking body and increase their physique.

The compound is not having any medical uses, but is going through research. The compound was under investigation of treatment of growth hormone deficiency and lipodystrophy, but is barely being researched nowadays. Nonetheless, bodybuilders are still using this compound for some of the reasons that were mentioned earlier.

There is CJC 1295 with DAC and CJC 1295 without DAC and this may be confusing for some people in what’s the difference between the 2.

First off, let’s explain the compound. GHRH is being paired specifically with GHRP and this is done for creating a synergy between the peptides that are going to unlike the body’s own stores of the growth hormone.

Despite the fact that there are many peptides which are working in some capacity by themselves alone, it is proven that you get the most benefits when you are running both of them together. This is the reason why CJC 1295 is so widely used and is one of the most famous peptides in bodybuilding industry.

Well, there is also MOD GRF which is CJC 1295 without DAC and this is pretty much the same as CJC 1295 DAC but it requires more injection frequency.

So well, MOD GRF 1-29 is actually CJC 1295 without DAC and this is a peptide better known as Semorelin. The compound is not as famous as CJC 1295 with DAC because of its extremely short half life.

With all of this being said, CJC 1295 with DAC and original GRF 1-29 known as MOD GRF 1-29 or CJC 1295 without DAC are both the same thing except for the half life. Think of this as the attached ester to the hormone which is delaying the release of the main hormone into the blood system. Pretty much the same thing happens here.

CJC 1295 DAC is most likely one of the best and one of the most widely used GHRH alongside with a chosen GHRP of your own choice. Pretty much like any other peptides out there that you know, this is a compound coming in a delicate lyophilized powder and it must be kept away from light in a cool and a dry place.

The compound then needs to be reconstituted with either sodium chloride but most often with bacteriostatic water and then should be kept in a refrigerator. This mixture must be used intramuscularly in a form of injection.

The most cost effective peptide in such a case would be CJC 1295 with DAC as this peptide would allow the bodybuilder to use (by injection) only 2 mg of this peptide 2 times per week with a daily injection of the GHRP of your choice. This way, you are allowed to have less injections but get normal blood levels and frequent growth hormone pulses.

Some of the side effects that can be associated with the use of CJC 1295 includes: decreased insulin number; tingling; water retention as well as numbness. Some people are also reporting getting some side effects like itching; feeling tired and feeling lethargic; head rush or euphoria.

Nonetheless, this compound is also having positive side effects and they include: increased protein synthesis, reduced body fat; promotion of bone density; increased lean body mass; faster recovery; cellular simulation for internal organs and skin cells and many others.

CJC 1295 DAC is a very famous and powerful peptide that can be purchased from this website from Hilma Biocare and every customer can be sure that he would be receiving a very high quality peptide for a very low price which is going to be super helpful.

You can notice that CJC 1295 DAC might be more expensive than CJC 1295 without DAC but this doesn’t mean is better in price. Customers actually save money by getting CJC 1295 DAC as is better in terms of price vs value.