What is Trenbolone Enanthate by Hilma Biocare? 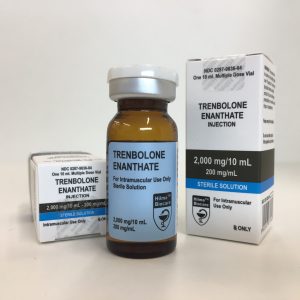 Trenbolone Enanthate is the brand / trade name of the active ingredient with the same name manufactured by Hilma Biocare. This is an extremely powerful anabolic androgenic steroid (AAS) that is less popular that Trenbolone Acetate but is more popular than Trenbolone Hexahydrobenzylcarbonate (or simply Hexa) known as its brand name Parabolan.

Trenbolone Enanthate, as we can see, is one of the 3 different esterified forms of Trenbolone – Tren, being in the middle in terms of popularity as well as half life due to the Enanthate attached ester (which is the same as in Testosterone Enanthate) offering faster release than Hexa but slower release than Acetate.

This steroid is coming in oil solution and never had any medical uses. However, bodybuilders have experimented with this compound and it turned out to be extremely powerful and helpful for physique and performance enhancement purposes.

Is also important to take in consideration that Trenbolone is not capable to aromatize into estrogen and no estrogenic based side effects can occur with this compound. All in all, this steroid is used with amazing success by those people who want to increase a lot of muscle mass, lean muscle mass as well as strength levels.

Despite the fact that Trenbolone Enanthate does not have any medical uses, the product is popular and extremely beneficial and helpful for bodybuilding purposes.

What is Trenbolone Enanthate Used For? | What Does Tren Do?

As mentioned, Trenbolone Enanthate is used only for increasing muscle mass and muscle strength. Having such a huge anabolic effects, we are referring to having amazing effects such as nitrogen retention; protein synthesis, muscle building effects, cell repair as well as many other benefits.

Also, there are huge androgenic effects which is leading to muscle hardness, huge strength gains (which is why Trenbolone is among the favorite steroids for powerlifters), increased metabolism as well as aggression which might be helpful when used in gym during intense workouts.

Trenbolone is working by binding to androgen receptors and it works in a similar way to nandrolones because Trenbolone is a Nandrolone derivative (NPP and Deca are Nandrolones) but there are very big differences between them.

In the end, the compound is also having fat burning properties and no estrogenic activity alongside with huge anabolic and androgenic activity. With this being said, people using Trenbolone Enanthate can expect to get extremely hard and dry looking muscles.

Trenbolone is very powerful and therefore very effective in low doses, offering drying effects, hardening effects of muscles, more strength levels, huge increases in muscle mass, veiny and vascular look and so on and so forth. Tren is very famous for having the ability to completely change a person’s look and body improvement while offers a lot of strength gains and performance increases.

Trenbolone Enanthate should be used pretty much as Testosterone Enanthate as they both come in oil based solution that should be used intramuscularly by injection having the same ester meaning that the product must be injected once or maximum twice a week, as many people prefer in order to get better results by having more stable blood levels.

However, the dosages shouldn’t be the same as with Testosterone but much lower, why? Because Trenbolone is much more powerful.

Most people would fit their needs in the range of 200 up to 600 mg per week of Testosterone Enanthate. Some people might use 700 mg a week but we do not recommend to use higher doses. in fact, most people won’t need anything more than 500 mg a week. Trenbolone is so powerful that doses between 150 and 350 mg are considered more than enough to offer tremendous effects.

Cycle length with Trenbolone Enanthate is most often in the range of 8 up to 12 weeks, mainly 10 weeks.

Generally, the compound is so powerful that we won’t recommend it to someone who does not have experience with steroids. Better start with something less harsh than Trenbolone if that’s your first steroid cycle. When you start with Trenbolone, start slowly and do not abuse it. Increase the dosage only if required.

You can try 10-12 weeks of Tren Enanthate 400 mg a week with Test Enanthate 500 mg a week , cardarine, aromasin and N2Guard. This would make an amazing combination.

Trenbolone is pretty notorious for offering pretty nasty side effects and that’s regardless in which ester is coming. Trenbolone Enanthate is not an exception and side effects can be really bad. However, there are people who do not get side effects out of using this compound at all and that’s because they use it properly and they try to manage the side effects. How?

Is very important to never abuse the compound, start slowly and increase dosage only if needed, add cardarine and ostarine alongside with N2Guard, have a healthy lifestyle, add supplements, have a good PCT plan at the end of the cycle including many other things. Some people might add anti prolactin drugs, other might need other compounds to keep their libido high.

Anyway, some side effects of Trenbolone includes: androgenic, natural testosterone inhibition, cholesterol and cardiovascular. They are: aggression; gynecomastia in rare cases; shortness of breath or coughing; inability to climax; loss of hair; dark colored urine; night sweats; insomnia; decreased endurance to cardio exercises, increased blood pressure and some others that are not mentioned here.

Trenbolone is considered among the most powerful steroids, but is also considered to be among the most dangerous with the nastier side effects compared to other steroids. That’s why newbies shouldn’t use it and you need to take it very seriously.

Where to Get Trenbolone? | Where to Buy Trenbolone Enanthate by Hilma Biocare?

Trenbolone Enanthate is an extremely powerful steroid which can be very helpful for physique and performance enhancement purposes if used properly, but can be pretty nasty in terms of offering negative adverse effects if used carelessly.

Trenbolone is very powerful and can change your body completely by adding a lot of muscles, a lot of strength, offers a dry and hardening effects and generally makes you grow while increases performance levels.

Trenbolone Enanthate by Hilma Biocare can be purchased directly from this website for making sure that you get a very high quality compound that is genuine and authentic and the best is that this steroid allows you to save a lot of money due to its low price.