What is Drostanolone Enanthate by Hilma Biocare? 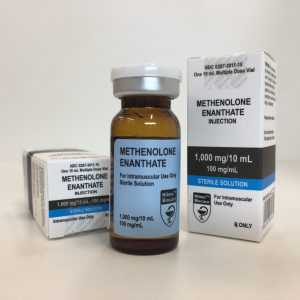 Drostanolone Enanthate by Hilma Biocare is a very high quality anabolic and androgenic steroid with unique properties offered for a very low price, which allows customers to save a lot of money making this specific product affordable for everyone.

This steroid is a dihydrotestosterone derivative and it was firstly introduced for medical use back in 1960s and pretty much as most other steroids ever created – the compound was designed to help people suffering from various health issues, with Drostanolone specifically to treat advanced breast cancer.

However, the compound is very rarely used in medical settings for any health needs because of the availability of other options, nonetheless, the compound has been proved to be extremely helpful and therefore popular for physique and performance enhancement purposes for bodybuilders and other gym rats who are using this steroid for various needs.

Drostanolone Enanthate is a least popular form of Drostanolone but is still very widely used. There’s also Drostanolone Propionate (in both cases with brand name Masteron) the shorter based Drostanolone that is more popular. However, there are still a lot of people preferring Drostanolone or Masteron with the Enanthate ester due to longer half life and therefore least injection frequency.

In the end, both compounds offer Drostanolone which is a famous steroid in bodybuilding and fitness industry which is useless when used alone, but is amazing when stacked with other steroids, which is offering less side effects being a mild steroid, but is still highly effective.

What is Drostanolone Enanthate Used For? | What Does Masteron Do?

Drostanolone Enanthate or Masteron Enanthate is rarely used in medical settings but is used for physique and performance enhancement purposes. Mainly the compound is used in cutting cycles for hardening and cutting effects but is also used as an aromatase inhibitor (AIs) because of its unique properties allowing the steroid to be stacked with other wet steroids and working in synergy.

Drostanolone is considered pretty weak on paper having anabolic to androgenic rating of only 62:25 but do not think that the compound should be abused for being effective as that’s definitely a mistake.

With this being said, since Drostanolone has low anabolic activity is pretty useless for gaining muscles when used alone. Is also not used in cutting cycles alone either. However, because of its AI properties, strong bind to SHBG and because this is the best steroid for getting hardening effects of the muscles, all while is offering less side effects, Drostanolone – Masteron is considered perfect when is stacked with other steroids.

It can be used for bulking cycles as an aromatase inhibitor and booster, or in cutting cycles for cutting, drying and getting shredded. If used for cutting, body fat should be less than 12%, otherwise there would be too much fat covering the muscles and the hardening effects won’t be seen.

As mentioned, Drostanolone should not be used alone under no circumstances. However, it can be stacked with Trenbolone, Winstrol, Anavar, Anadrol, Dianabol, Deca, Testosterone and Equipoise (including others) all with great success. Which of these steroids should be stacked depends on your ultimate goal.

Remember that Drostanolone Enanthate is coming in oil solution that must be used intramuscularly by injection and due to the enanthate attached ester, the compound can be used less frequently. For example, once every 5 days is going to be enough, although there are people who prefer to use it every 3 days for keeping even more stable blood levels, however that’s not necessary.

Cycle length with Drostanolone Enanthate is in the range of 8 up to 12 weeks or so with dosages that range anywhere between as low as 300 mg per week or as high as about 1000 mg per week. Nonetheless, most people prefer doses between 400 and 600 mg per week as this is the sweetest spot.

There are numerous of cycles with Drostanolone but in whichever the case, the individual is very recommended to stack Drostanolone – Masteron with other steroids because being used alone, the steroid is pretty ineffective and useless, but is extremely helpful when stacked.

Drostanolone Enanthate is offering the exact same side effects as its more famous version Drostanolone Propionate and that’s because in the end, you’re receiving same active substance. Drostanolone – Masteron is a DHT dihydrotestosterone derived anabolic and androgenic steroid (AAS) and that’s why is quite obvious that androgenic side effects such as aggression; male pattern hair loss; acne and others are possible while, pretty much as with most other DHT derived steroids, estrogenic side effects are not possible.

So, the worst side effects includes androgenic side effects for both men and women (generally, women are not recommended to use Drostanolone because they would be turned into men because of virilizing side effects) while the steroid is fighting off with the estrogenic based side effects.

Drostanolone is not very liver toxic, however you are still recommended to run a supplement for liver as with any other steroid.

Except for androgenic side effects, the compound is inhibiting natural testosterone production, as any other steroid, so a good PCT – Post Cycle Therapy plan is required.

Drostanolone is considered a mild steroid in terms of side effects, but they are still possible. There might be other side effects that have not been mentioned here.

Where to Buy Drostanolone Enanthate by Hilma? | Buy Masteron Enanthate

Drostanolone Enanthate which might be known as Masteron Enanthate by some people can be purchased from this page on this website and receive a very high quality steroid of high purity offered by Hilma Biocare. This pharma company got very reputable online known to offer steroids of high quality and low price.

By getting this steroid from this page by Hilma Biocare, you’re going to save a lot of money and you can be sure you get an amazing steroid which doesn’t compromise on quality.

Drostanolone Enanthate should be stacked with other steroids and it can work in synergy with any of them, being an amazing product which can be used during contest preparation or while your cutting, or in synergy with aromatizing steroids for counteracting the gynecomastia and water retention.