What is Mesterolone by Hilma Biocare? 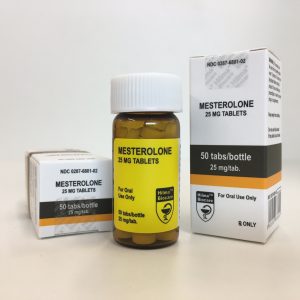 Mesterolone by Hilma Biocare is an orally active androgen product that is not being considered an anabolic steroid and is very different from the usual steroids that we know. In fact, Mesterolone is not even used as a steroid but is used as an anti estrogen product.

Mesterolone is actually the chemical name of the active ingredient in the compound with the same name manufactured by Hilma Biocare, however, the compound might be known by its trade/ brand name as Proviron.

Proviron was initially developed by Schering company a lot of years ago in 1934 with the active ingredient Mesterolone. However, Mesterolone from Hilma Biocare is actually the exact same compound but is offered for a much lower price. So, we can say that Mesterolone by Hilma is the same Proviron both containing Mesterolone of a high quality and high purity, but you save money.

Despite having a very low anabolic activity, it still has some (but is so low that is considered practically inexistent) and that’s why Mesterolone is considered an anabolic and androgenic (but more androgenic) steroid (AAS) and is being used mainly for treating low testosterone levels.

Nonetheless, the compound is also used for improving physique and performance, but due to its very low anabolic activity, is not being used for growing muscles, instead, the compound offers anti estrogenic activity and therefore is mainly used for such purposes by most people.

This is one of the oldest steroids ever manufactured and the compound is coming only in form of oral tablets. This is a DHT derived medication and Proviron – Mesterolone is the purest DHT steroid compared to all others out there.

How Long Does Proviron Take to Work? | Proviron Half Life | Mesterolone Half Life

Proviron containing Mesterolone is starting to work in a matter of a few minutes after it gets administered because of its pretty short half life and fast release in the system. However, is important to know that the results and effectiveness of this compound starts to be seen in a matter of days or even weeks after continuous and every day administration with the steroid.

Proviron – Mesterolone is having a half life of approximately 12 hours which is normal for an orally active steroid. This means that the compound is staying in your system for 24 hours but it starts being much less active after about 16-17 hours of last dosage. That’s why, for keeping stable blood levels, 2 administrations every 12 hours is recommended.

Proviron – Mesterolone is used as an anti estrogen because of its properties allowing for a high affinity to bind to the aromatase enzyme. With this being said, anabolic steroid users are using the compound as a replacement for aromatase inhibitors (AIs).

In the past, the compound was also used in bodybuilders as a PCT medication; however there are some studies suggesting that Proviron – Mesterolone is suppressing natural testosterone production for this reason, nowadays, the compound is rarely or never used as a PCT. Instead, the compound is used with great success as an anti estrogen.

Why would people use Mesterolone – Proviron as an anti estrogen when there are actually anti estrogens? Well because they are able to receive estrogenic protection while Mesterolone is binding very strongly to SHBG – Sex Hormone Binding Globulin, a hormone that is making other steroids less effective minimizing their effectiveness.

When Proviron – Mesterolone is used alongside with other aromatizable steroids, individuals do not only get estrogen protection, but they make other steroids much effective too.

For these reasons, Proviron – Mesterolone is very famous and is used in both cutting as well as bulking cycles in both situations for offering a drier / leaner look.

When to Take Proviron? | Proviron Dosage | How Much Mesterolone Should I Take?

Proviron – Mesterolone should be taken only when is stacked alongside with other anabolic steroids. It must be taken on a daily basis (2 times a day) in form of oral tablets swallowed and dosages ranges between 25 mg up to about 80 mg a day. Most people find it perfect between 25 and 50 mg per day.

Remember that Mesterolone – Proviron is having no anabolic activity and therefore when used alone, is pretty useless for a bodybuilder.

Instead, the product works in perfect synergy with wet steroids when you want to bulk up. For example, with Dianabol. Mesterolone with Dianabol is going to be a perfect balance while you’re going to get size as well as hardness for your muscles with a great body look (without too much water retention and bloating).

Also remember that Mesterolone is not C17 alpha alkylated so it can be stacked with any other oral steroid like Winstrol, Dianabol, Anadrol or Anavar and most often, these are the steroids stacked with Proviron – Mesterolone.

Here’s a very good cycle with Mesterolone – 8 weeks of 40 mg a day of Dianabol alongside with 50 mg per day of Proviron, 20 mgs daily of Cardarine and 5 caps ED for N2Guard or other supplements.

Mesterolone can be dangerous if abused but is by far not as dangerous as many other anabolic steroids. Proviron – Mesterolone side effects are directly related to the dosages used. By not abusing this compound, you are unlikely to get too bad side effects as the steroid is pretty safe.

Nonetheless, the worst side effects of Mesterolone includes those from DHT characteristics and that’s no wonder taking in consideration that this compound is a pure DHT derivative. DHT/ androgenic side effects are including: hair loss, especially to those who are prone to them, aggression; acne, oily skin and others.

Instead, the compound is not able to aromatize and is not C17 alpha alkylated meaning that no estrogenic based side effects and no liver hepatotoxicity. Testosterone suppression might be possible, but the suppression is by far not as bad as with many other steroids.

A Post Cycle Therapy plan is recommended by everyone, but this compound is so mild suppressive to testosterone that some people reported not going through a PCT and they were still fine.

Females should stay away from this steroid because the side effects for them can be very bad and unpredictable, especially when it comes to virilizing side effects, plus they get little to no benefit at all.

Proviron known as Mesterolone by Hilma Biocare can be purchased from this website for a very low price. Mesterolone is the active substance in this product and is also the trade name of the product manufactured by Hilma Biocare. Customers are capable to save a lot of money while getting this famous steroid which can be super helpful.

Remember that using Mesterolone alone is pretty worthless, however, the compound is extremely beneficial and helpful when stacked with other anabolic steroids. It is often used in cutting cycles stacked with cutting steroids but is also perfect for bulking cycles when stacked with aromatizable steroids because it forms a perfect balance of size and hardness.