What is Parabolan by Hilma Biocare? 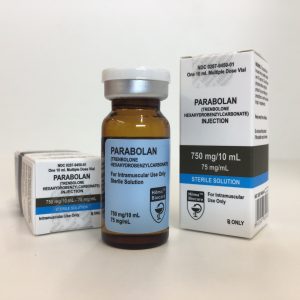 Parabolan is the most famous trade / brand name for the active substance Trenbolone Hexahydrobenzylcarbonate or simply Hexa manufactured by Hilma Biocare. The compound is actually oil based solution that should be used by intramuscular injection and this is a very powerful steroid that was used in medical settings but then was discontinued.

The compound is also often sold as Hexabolan or other trade names, however, Trenbolone Hexa offered as Parabolan by Hilma Biocare is offered for a very low price and is maintaining the same high quality and purity of the product. This anabolic and androgenic steroid is of the nandrolone group as is a nandrolone derivative (Deca Durabolin and NPP are nandrolones) which is offering high anabolic to androgenic activity.

The compound was marketed in France for use in humans in 1980 but was discontinued in 1997. However, the steroid is still very widely used in bodybuilding settings for physique and performance enhancement purposes. Trenbolone Hexahydrobenzylcarbonate is a very long lasting steroid due to attached ester and the hormone itself is very powerful. With this being said, Parabolan is a perfect combination allowing customers to administer it rarely but still receive amazing effectiveness.

Trenbolone Hexa is the longest form of Trenbolone manufactured as there is also Trenbolone Acetate the shortest and the most popular and widely used and Trenbolone Enanthate with longer ester than Acetate but shorter than Hexa.

The steroid was created back in 1960s and when used in Acetate form, the steroid is used in veterinary for helping cattle to grow as big as possible. When is used by humans, the compound is working in a similar way by making you huge.

Trenbolone (regardless of the ester) is having an anabolic to androgenic rating of 500:500 and as a comparison, Testosterone is offering same ratings of 100:100 meaning that Trenbolone is 5 times the potency of testosterone. In addition to this, Trenbolone does not aromatize into estrogen either.

Trenbolone is also offering fat burning properties so the steroid is basically making you huge by adding a lot of lean muscle mass, while helping to lose body fat and offering an amazing body look with performance enhancement.

What is Parabolan Used For? | Trenbolone Effectiveness

Nowadays, Parabolan containing Trenbolone Hexa is used only for physique and performance enhancement by bodybuilders, powerlifters and fitness models and athletes. It doesn’t have any medical uses and no veterinary uses. Nowadays only Tren Acetate is used in veterinary settings while Tren Hexa was used in the past for humans.

Instead, the compound is super helpful for humans and despite the fact that is not as popular as other Trenbolone compounds, it is said that Trenbolone Hexa is much helpful and a better option than for example Tren Enanthate. People find Tren Hexa to be more powerful than Acetate and Enanthate.

The actual reason why is not so popular is because of its low availability in the past. Now customers can get it, but the other 2 Trenbolones are much popular. In the end, Trenbolone Hexa – Parabolan is extremely powerful and very helpful.

This compound is working in the same way as any other Trenbolone compound because in the end, you receive same hormone. The steroid is going to make you huge with insane gains in both lean muscle mass and muscle strength. Parabolan would change your physique a lot by making you lose fat in the time you get dry, shredded and lean muscles added.

How to Use Trenbolone Hexa? | Parabolan Dosage

Trenbolone Hexa – Parabolan is oil based solution that must be used intramuscularly by injection and thanks to its very long half life of approximately 10-15 days, the compound is used with great success once every week. In fact, there are people using it once every other week with great success too.

The dosages of Trenbolone Hexa – Parabolan are not very different from the dosages of any other Trenbolone compound taking in consideration that you receive same hormone. The difference is that Tren Hexa might require more time to build up in your system.

Anyway, dosages of Trenbolone Hexa are said to be anywhere in the range of 150 up to 700 mg a week at most. This covers everyone’s needs.

For example, a newbie with Trenbolone should start at 150 mg up to 350 mg a week. More advanced between 350 mg and 550 mg a week while professionals go for 550 up to 700 mg a week. You shouldn’t attempt higher doses than 700 mg a week because it can be dangerous.

Trenbolone cycle length depends on the ester and taking in consideration that Tren Hexa has the longest, a cycle length with Parabolan is usually 10-12 weeks.

Parabolan should be stacked with testosterone in most cases. But it stacks very well with nearly any given steroid of your own choice, mainly except for those that increase progestin levels. A very good cycle with Parabolan is: 12 weeks of Parabolan 400 mg a week with 500 mg a week of Testosterone Cypionate; Cardarine known as GW-501516 at 20 mg a day, aromasin (or other aromatase inhibitor) at required dosage and at least 7 capsules per day for N2Guard.

By adding Cardarine, Aromasin and N2Guard is the purpose for reducing the side effects or completely avoiding them. Other methods to avoid side effects is to have a healthy lifestyle with diet and regular exercise; add supplements, plan a good PCT following the cycle and most importantly – never exceed the cycle length or especially the dosage.

Some side effects that are associated with Trenbolone’s use include: insomnia, night sweats; reduced cardio resistance; increased blood pressure; androgenic side effects like oily skin, acne, aggression and others, as well as it is known to suppress natural testosterone production.

Trenbolone does not offer estrogenic side effects, but due to progestin elevated levels, in some rare instances you may receive gynecomastia too. Parabolan is a very powerful steroid, so it must be treated accordingly.

Where to Get Trenbolone Hexahydrobenzylcarbonate? | Where to Buy Parabolan?

Trenbolone Hexahydrobenzylcarbonate which might be better known simply as Tren Hexa sold as trade name Parabolan is a very powerful anabolic and androgenic steroid that is capable to completely change your physique and greatly increase your performance levels. Parabolan by Hilma Biocare is a steroid which would offer you a lot of benefits but you’re also going to save a lot of money since Hilma Biocare offers high quality steroids for low prices.

You can get Parabolan directly from this website and you would really love the price of the product, the quality and the results you can get out of using this powerful steroid known as Parabolan.